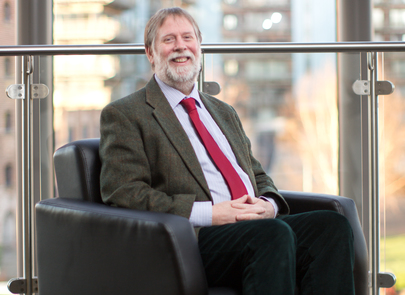 Andy Smout is Vice President, Research at Canon Medical Research Europe, with overall responsibility for technology research, advanced development, intellectual property and software architecture. He has extensive experience in designing, building and supporting large scale software systems and has recently been responsible for the establishment of Canon Medical’s global Centre of Excellence for Artificial Intelligence in Edinburgh.

After gaining his PhD in Quantum Electronics from the University of Essex, Andy worked in factory process control and semiconductor lithographic overlay metrology before joining Canon Medical in 2000. He worked for many years as Technical Lead of the Custom Solutions division, and following a brief period as Engineering Manager for Voxar 3D he transitioned to Chief Architect in 2007, Group Leader of Infrastructure in 2010, and finally Vice President for Research in 2013. Andy has been awarded a number of patents; however his proudest achievement was to have a seminal paper on “Mutually Incoherent Beam Coupling in BaTiO32” published in 1987, which has now received 142 citations (not that he’s counting, you understand).